Disclosure: 90sfancydressideas.co.uk is a participant in the Amazon Associates advertising program. This enables us to earn fees from linking to products at Amazon.co.uk.

How to Create a Ginger Spice 90s Costume

Creating a Ginger Spice (Geri Halliwell) 90s Outfit is pretty straightforward. The main item you'll need is a union jack dress, and this look became an iconic part of the decade. The dresses vary greatly in terms of quality and price, so I'm going to show you where to get the best rated dress at the lowest price.

Finding a dress that looks exactly like the original is nigh on impossible. However, this one by Smiffy's on Amazon is the closest I could get. The price is reasonable and it's available in four sizes - S, M, L or XL.

Please note that the wig and red boots are not included - you will receive only the union jack dress.

This glittery union jack dress is the most highly-rated by customers at Amazon . Reviews suggest it is on the short side, although Geri's dress was pretty short anyway and revealed her black underwear! This dress is available in three sizes from 8 to 18. However, it does not look as authentic as our first choice.

Finding boots that look exactly like those that Geri wore has been an impossible task, but the best option is to wear red go-go boots, which are basically 60s style shiny red PVC boots. They're a little higher than what Geri wore, but for fancy dress purposes they are ideal. They're not cheap, but after some shopping around, I found this pair on Amazonwhich are good value and better rated than other suppliers.

The cheaper alternative is to buy red boot top covers. However, I would advise you not to bother as it is impossible to make them look half decent like in the misleading picture. Basically, they're cheap but look rubbish, so a complete waste of money - don't bother!

This is the official wig by Smiffy's, and you can also choose any of the other four Spice Girl's wigs from the same supplier. 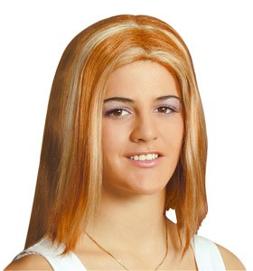